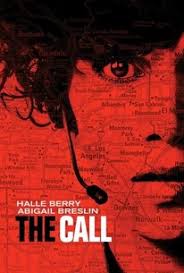 Hang on to your hat with Halle Berry's new movie, The Call, because you may need it to cover your eyes during this thriller! If you are a woman, this film contains content that is sure to scare you silly, but it will make you more aware of your surroundings (and possibly more prepared if faced with a similar situation). You will also come away with a new respect for all 911 operators.

While I don't want to give away too much of the story, the movie starts with Halle's character, a 911 operator, receiving an emergency call from a teenage girl being pursued by a serial killer, played masterfully by Michael Eklund. The frightening and sadly realistic plot, while a bit uneven, and sometimes predictable, does hold its own in terms of keeping the audience on the edge of their seat from start to finish. This is mostly due to the director, Brad Anderson, seamlessly weaving the moment to moment interactions between Halle's character and each 911 caller. We are right there with her for most of the twists and turns, especially during the nail-biting, "real time," drama that unfolds.

Abigail Breslin, of Little Miss Sunshine fame, does a great job as a kidnap victim. This young actress brings us from teenage innocence through survivalist mentality. I was excited to see Micheal Imperioli in the cast list; unfortunately, even though he puts in a good performance, his talent is underutilized in a small role. The same goes for the always superb Roma Maffia as the 911 floor manager; and the handsome, and very capable, Morris Chestnut, who plays Halle's love interest.

Halle Berry puts in a believable performance in this role. Unfortunately, the wig she wears is quite distracting. There is no downplaying her beauty and onscreen presence; trying to do so is an unnecessary, obvious ploy. She holds her own in this part, even when faced with some weak dialogue. It won't win her another Academy Award, but she does stretch her acting chops by working with a headset most of the film instead of face to face with another actor.

The film is rated "R" because the violence against women is unnerving and blatant. If you are faint of heart, then I recommend skipping this film. If you like a thriller and can get past the serious subject matter, this movie delivers fast-paced, heart-pounding, real-time elements that make for an exciting, yet disturbing ride.